Jerash, known for the ruins of the ancient Greco-Roman city of Gerasa, and Ajloun, known for the 12th century castle on a hill, are perfect for a day trip from Amman. If you’re into Greek or Roman history, Jerash is one site out of Europe that you’d definitely not want to miss. Read on to find out how you can complete this day trip on your own!

After almost 2 weeks in Jordan, there were still plenty of amazing destinations waiting to be explored. Next up on my list was Jerash and Ajloun, which I decided to try to complete as a day trip from Amman, given their proximity. Some good company along the way made the journey a lot more fun.

Getting from Amman to Jerash

First, catch a taxi to Tabarbour Bus Station (North Bus Station), which should cost around 2JD by meter from most of Amman (or Careerm to avoid getting ripped off in any way). From there, the bus to Jerash costs 1JD and will take you to near the entrance to the ruins.

Right from Hadrian’s Arch till the far end of the ruins I was amazed at the scale and grandeur of these millennia old structures. Never thought I’d see anything like this much like Rome till I came here. Having an understanding of the colourful history of Jerash will facilitate deeper appreciation of the ruins, and you can read more about it at the Wikipedia article here. The points of interests are spread out over a fairly large area and will take a bit of walking to cover. Here are some of them!

Right where the bus stopped us we could see the imposing Hadrian’s Arch beyond the fences of the ruins. On the other hand the entrance to the site was less obvious, We had to go further in the side road to get to a marketplace packed with souvenir shops, and brave past the touts to finally come face to face with Hadrian’s Arch! It was built in 129 AD to commemorate Emperor Hadrian (Roman Empire)’s visit to Gerasa.

Beyond the arch is the Hippodrome, used for horse/ chariot racing in ancient times.

A long straight paved way will lead you to the South Gate, where there may be ticket checks. After the South Gate you’d almost be at the heart of the action. First up is the sprawling Forum, the oval shaped plaza encircled by a row of columns.

Turning left just at the start of the Forum, the Temple of Zeus stands tall on slightly elevated ground. No matter how you look at it, it’s still pretty imposing.

Next to the Temple of Zeus is the South Theatre. Apparently it was larger and could seat thousands. Still looks quite big to me now. From the top of the stairs you’d get a good view over the ruins of Jerash as well as the new city beside it.

Back down at the Forum, the Cardo leads the way to the rest of the ruins. The Cardo is a wide, long street, lined with tall columns. As the main street through Gerasa, the key buildings and shops in the city were built along this street.

All is dry now at this water fountain, so elaborately decorated. Still a beautiful piece of art. Look out for the fine details at every corner of this sculpture.

Gateway to Temple of Artemis

Further down the Cardo from the Nymphaeum, a huge gate rises from the ground The stairs behind the gate leads to the Temple of Artemis.

Artemis was the patron goddess of the city of Gerasa, and needless to say, this was a splendid temple. 11 Corinthian columns (out of the original 12) stand spectacularly at the temple. There are parts of the temple hidden behind the altar, and for a couple of dinars the men selling coins or tea at the temple may take you there and provide some good stories.

The last major stop, in the north of the city, is the North Theatre, smaller compared to the one down south near the Forum.

Back on the Cardo, you can see the end of the city boundary, marked by the North Gate. I didn’t venture that far though.

Slightly off the Cardo, not far from the North Theatre you’d also spot the West Baths, which used to be a complex of hot, warm and cold baths. Public baths were the center of social activity, and I’d imagine it’ll be lively here.

That wraps up the highlights you’ll see at Jerash/ Gerasa ruins. To get out of the fenced compounds there are a 2 options-following the Cardo back to where you came in from, or taking the exit to the main road via a side path somewhere near the gateway to the Temple of Artemis. If you’re looking for somewhere for lunch head left upon reaching the main road (from the side gate). At the traffic junction, turn uphill into Jerash city and you’d find some affordable food options just beyond the junction. My travel companions and I decided on Golden Chicken, and I got a set of fried chicken and some sides for 3JD. Not too bad I guess.

Getting from Jerash to Ajloun Castle

After lunch, I met up with another traveler to get to Ajloun. We asked around for directions to Ajloun and were directed to the road seen below, not far from the entrance to Jerash ruins.

Finding the right taxi though, was a trickier issue. As with much of Jordan the dodgiest part for tourists is transport. Asking around, we were quoted between 1JD and 10JD, a difference of 1000%! Evidently, the ones pushing for higher prices were trying their luck, as they immediately dropped prices upon seeing our reaction to the ridiculous quote. In the end the 2 of us got into a private car with 2 others waiting for 1JD each (Ajloun is quite near). Upon reaching Ajloun city, the driver requested for another 1JD each to get to the castle. We were a little irked by relented anyway. I guess the point is to be ready for these tricks regardless of the form of transport you’re picking in Jordan. (I got double charged for a bus in Karak).

While not as spectacular in scale compared to the ruins in Jerash, Ajloun Castle has a long and interesting history and is worth checking out if you’re already in the area. Ajloun Castle was built in the 12th century and occupied by various Muslim empires over time. More details on its history on Wikipedia here. In contrast to the desert castles I visited in Jordan (Shobak and Karak), Ajloun Castle was never a Crusader castle but was instead a key part of a defensive line against the Crusaders. It may also be interesting to note that the grounds are smaller than the two, and the castle is in much better shape than the two. Here are some shots of what you can expect from about an hour exploring.

Unlike Shobak and Karak castles which lay mostly in ruins, Ajloun Castle is still (mostly) standing and the interior much more explorable.

It was fun exploring the maze of rooms and stairs in the castle. But it was getting dark and soon time to get back to Amman.

Getting from Ajloun Castle back to Amman

Firstly you’d have get down the hill to the bus station. Somehow we managed to hitch a ride to the bottom with a staff member who was getting off work, but ask around castle staff or the police officers and they’d be able to provide information on the best way down. Just avoid the transport providers (like taxi drivers or private hire drivers) when asking for information on the transport. The bus to Amman should cost about 1/1.5 JD and will end at Tabarbour Bus Station (North Bus Station). From there get a metered cab or Careem back to your hotel for a well deserved dinner and sleep! 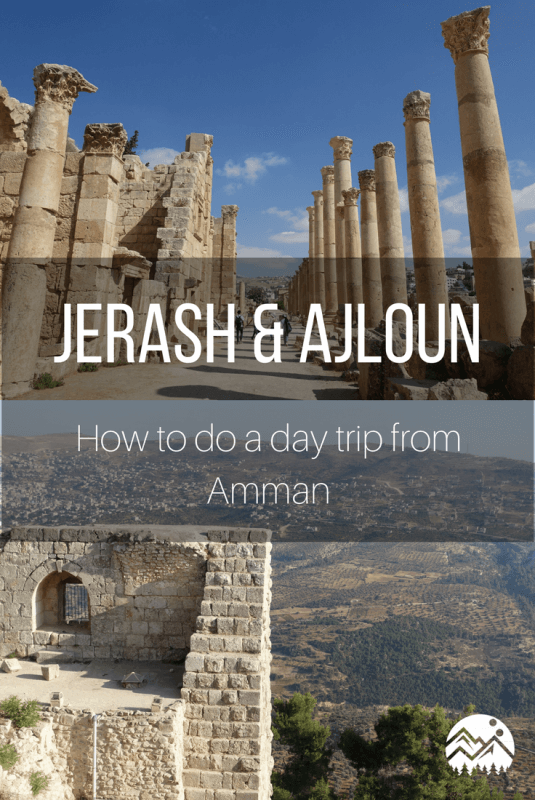