The last stop of our short north Sumatra adventures, Medan! Back where we started 5 days before, for a quick tour of the city before heading home. Medan isn’t exactly an exciting city, but there’s still some history, culture, and lots of food. That’s all we needed for one last day before heading back to our little office cubicles.

Getting from Berastagi to Medan by public transport

This was the route we took, as our journey had took us to Lake Toba and then to Berastagi. It was an experience on its own getting squashed at the back of a pickup truck winding through the mountains for 3 hours. Hopefully that only happens during peak periods and you won’t have to get through that to reach Medan. To get public transport from Berastagi, head to the roundabout in the middle of town and wait at the side of the gas station, opposite little shelters that look like traditional houses. Buses, minibuses, pickups and all sorts of vehicles stop by to ferry passengers to Medan for around 10,000-15,000 IDR. For more on how I ended up squeezing on the back of that pickup, check out my post on Berastagi.

Follow the signs towards public transport and these will lead you out of the airport building. From there, turn right and you will find buses to various stops in Medan at these prices:

This is the most expensive but also the fastest and most straightforward. Possibly one of the more comfortable options too. Trains run at frequencies of 30 mins to an hour (depending on time of day) and take approximately 40 minutes to reach the city. Tickets cost 100,000 IDR and can be easily bought with cash or card at the station. 2018 train schedules here.

For more details on the various modes of transport from the airport to the city check out the transport page for Kualamanu International Airport here.

One night in Medan: Food and more food at Jalan Semarang and Jalan Selat Panjang

It was already past sunset by the time we had arrived and settled down. Mustering the little energy we had left we made our way to our first stops in Medan, Jalan Semarang and Jalan Selat Panjang, 2 popular food streets close to one another. One of the highlights of Medan is food, and when one talks about food in Medan it’s hard not to mention both Jalan Semarang and Jalan Selat Panjang. Look at how many times these 2 streets were mentioned in this article of 30 must eats when in Medan!

The vibes at Jalan Semarang were strong. Reaching the heart of the action, adrenaline took over, just looking at the long stretch of hawker stalls, the lively crowds enjoying the variety of delicacies, and the fast paced cooking happening in front of my eyes.

There were lots of seats available to enjoy your food on the spot. The areas seem to be managed collectively, as we bought from a few stalls and paid only once at a combined cashier (the big boss?).

2 streets to the east, parallel to Jalan Semarang, is Jalan Selat Panjang. It’s just as lively here, though slightly more compact. Some swear by the food here, with mouth watering noodles, porridge and other traditional Chinese delicacies. For a bit more of what to expect on this popular food street, check out this article on Jalan Selat Panjang.

One of the most famous/ popular stalls on this stretch is Mie Tiong Sim, which had a queue formed outside. The dumpling noodles (mie pangsit) were delicious! Though similar to wanton noodles in Singapore, the taste was distinctively different. This felt a little pricey though, and word has it that the standard has dropped over the years. Still, the queue speaks for itself. Mie Tiong Sim’s Tripadvisor reviews here.

We tried a couple more dishes, pretty much hit and miss but the baseline was decent, and there were definitely more attractive choices than our stomachs could fill. After all that food all we needed was something sweet to fill our dessert stomachs.

Martabak Yurich was quite a walk from Jalan Semarang/ Jalan Selat Panjang, but just what we needed to clear off some of the food we ate before loading on again. Seems that you can’t really go wrong with Martabak in Indonesia, and Martabak Yurich was no exception. There are many flavours and 2 sizes to choose from. Sweet and buttery, and just the thing to complete the night.

Half day tour of Medan

The next day, with a couple of hours left, we visited some of the attractions near the center of Medan before catching the flight home.

First stop of the day was Istana Maimoon. This royal palace was built towards the end of the 19th century by the 9th king of the Sultanate of Deli, and functions as a museum today. The public areas is not too big and can explored quite quickly. There were information boards but somehow stacked hastily in a corner and not much is viewable. The palace itself is beautifully decorated and well maintained, certainly worth a look both on the inside and outside. To top it off, entrance fee is only 5,000 IDR!

About 300m to the east from Istana Maimun, via Jalan Mesjid Raya, is Masjid (Mesjid) Raya Al-Mashun Medan, the Great Mosque of Medan. This mosque was commissioned by the same king who built Istana Maimun, in accordance to the principle that it should be more important than his palace. As it turned out, the mosque certainly looks more grand and splendid than the palace. We enjoyed the view of the mosque from the outside and did not enter.

From the mosque, head northwest along Jalan Sisingamangaraja for about 750m. There, just beside a busy cross junction, is the Tirtanadi Water Tower, a landmark of Medan. The water tower is 42m tall, over 100 years old and was built by the Dutch. While now surrounded by buildings that are just as tall, the water tower is still an imposing sight.

From the cross junction the Tirtanadi Water Tower is at, head southwest along Jalan Pandu for about 270m to the next big cross junction, then turn right and head northeast down Jalan Permuda for 450m. After this cross junction, the road ahead (in the same direction) is now Jalan Jenderal Ahmad Yani. 100m (northeast) along this road later, Tjong A Fie Mansion is on the right. Entrance to Tjong A Fie Mansion is a bit steep at 35,000 IDR but if you’re not tight on a budget it’s definitely worth a visit for the splendidly decorated rooms.

Tjong A Fie was a wealthy businessman and philanthropist of Medan who built this mansion in 1895. Initially I was skeptical of how the home of a businessman can match up as an attraction in Medan, alongside the likes of the royal palace and grand mosque. However, seeing that it has been a mainstay on Medan itineraries I decided to check out what this was all about.

Turned out that Tjong A Fie has much more to do with modern day Medan beyond being the place where he built his fortunes. Throughout his life he contributed large sums towards communities, not just that of his own, but towards other communities in Medan as well. Over time, he became an influential and well respected figure. He also left his mark through the many buildings in the city he contributed towards to.

The Tjong A Fie Mansion today is not just a testament to his wealth but also his connections to the city and beyond, with special rooms for the Sultan (king), foreign delegates, and for committees he played a large part in.

We took up a tour which was on a donation basis, and that helped to give meaning to many of the rooms that may have been lost on us if not for the explanations. The tour takes about an hour. For more information on Tjong A Fie Mansion check out their site at tjongafiemansion.org.

Time for lunch! We decided upon a highly rated curry noodles shop, Rumah Makan Tabona, about 500m from Tjong A Fie Mansion. From the mansion head backwards (southeast) along Jalan Jendral Ahmad Yani (which becomes Jalan Pemuda after the cross junction) for about 400m. Turn right into Jalan Mangkubumi and about 100m in you’ll find Rumah Makan Tabona (Rumah Makan Tabona). Here, you’ll be able to get noodles (yellow noodles or white rice noodles) with chicken or beef in a delicious curry. There are other options too if curry is not your thing, but the main draw here is the curry noodles.

Kesawan (in Indonesian, can be translated on Chrome) is a historic district in Medan encompassing several notable old buildings, including the Tjong A Fie Mansion. After lunch, we took a walk down the main road through Kesawan, passing through Jalan Jendral Ahmad Yani and Jalan Balaikota. You can find some interesting architectural styles here. Here’s a few of them:

That brought us back to our hotel, Grand Sakura Hotel, which was decent, clean and value for money for a short stay. All that’s left is to get to the airport to get home! To get back to the airport, the fastest and most expensive way is via train, at 100,000 IDR for a ~40 min ride. As the other options took significantly longer and we wanted to maximize our time in Medan we opted for this option, which was relatively expensive but still manageable.

With that, our day in Medan was up, and so was our 5 day quick trip of North Sumatra covering Lake Toba, Berastagi and Medan. Done with a couple of short trips in 2018, time for some (or at least one) long one! Stay tuned! 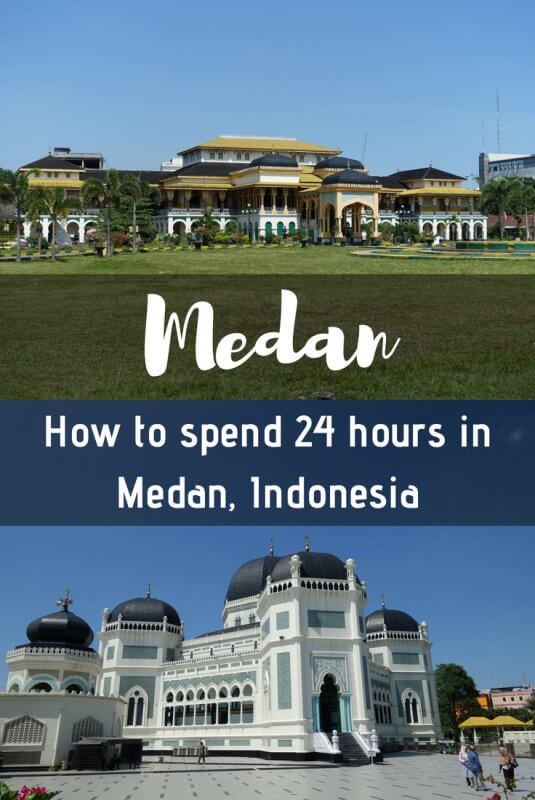