Aqaba, the Jordanian city by the Red Sea. Steeped in history but with a more industrial focus in recent times, Aqaba could prove to be a bigger tourist destination than its current role as a transit point and a diving destination as it discovers more of its past and make its history more accessible to tourists.

Jordanians go to Aqaba to enjoy sun, sand and sea. Tourists in Jordan, on the other hand, stop by Aqaba for a few reasons:

For me, it was neither of the above. I just had to get out of the desert (Wadi Rum) and find a way to my next stop, Dana. Aqaba seemed like the most logical choice. I decided to stay for a day, and discovered there was more the Aqaba than border crossings and underwater sightseeing, but also learnt the hard way that leaving inter city traveling for a Friday is one of the worst ideas a traveler can have while in Jordan.

After all that adventure getting to Aqaba from Wadi Rum, I arrived in Aqaba around noon with my friends, and as we all had different plans, it was time for goodbyes. To save you from having to read the other post till the end, I had missed the morning bus from Wadi Rum to Aqaba, managed to hitch a ride from travelers who had rented a car, got the car stuck in the soft desert sand for a good hour, before finally being on our way to Aqaba, singing wildly along to the radio all the way.

Getting my priorities right, I headed straight for Al-Ghandour Beach, by the Red Sea. Half of Jordan was already there ready for the weekend (it was Thursday then and Friday is the start of the weekend in Jordan, as with the rest of the Middle East).

Not that spectacular looking a beach, but nonetheless a welcome change after a week in the desert. The beach and waters were remarkably clean, considering the crowds there. Decent for an afternoon chill, if it wasn’t too warm.

At the end of the beach is the Arab Revolt Plaza, which commemorates the Great Arab Revolt of 1916, led by Sharif Hussein Bin Ali, great-great-grandfather of King Abdullah II, current king of Jordan. The plaza sits in front of the House of Sharif Hussein Bin Ali, and in the middle of the plaza sits one of the tallest freestanding flagpoles in the world, at 130m. Just a teaser for Jordanian history, as the Aqaba Museum and Castle, behind the House of Sharif Hussein Bin Ali, were closed for renovations. I spoke to a staff in one of the offices at the compound, and he told me about how there had been talks going on about money coming in to complete the refurbishments. Talks that went on without having materialised yet. He was jovial and laughed as he spoke, but there seemed to be a hint of a frustration with the delay.

Further down the coast is the Aqaba Heritage Museum. It is a free museum with a collection of photographs and artefacts from Aqaba’s past. A simple museum, but some exhibits were amusing, such as the one below with mannequins and dolls dressed up in Arabic wear and a random collection of artefacts that may not have been related. A baby doll looked like it had just been carelessly tossed in a corner (not seen). All’s good for a free museum, though.

Walking back towards the city, I passed the downtown area, full of shops, traffic, and life. Buildings here have some flavour to them.

I headed over to the other side of the city to check out the ruins of Ayla, an ancient Islamic city founded in 650AD. While there is an interesting background to the story of Ayla, the is currently only partially excavated, with minimal information on site. The site, while enclosed by a surrounding fence, is actually free. I thought the gate was closed and nearly missed getting in, but an old man who definitely didn’t looked like he worked there show me the gate was open.

I went in and spent some time exploring the ruins, alone in the entire site, not really understanding much but amazed at this relatively unknown piece of history.

When I was about to leave, the old man came back and seemed to request for payment. I was puzzled as the site was written on tourist brochures from the visitor information center to be free. I politely declined. He persisted, and so did I. He looked irritated but I left anyway. Some distance away I turned back and saw that he had drove away. Definitely did not work there. If anyone’s checking that place out, beware.

Further down the road there are a couple other ruins around the place, not properly secured or sign boarded but sufficient to see that there were ruins there.

I’m excited to find out what stories these sites may tell. Hope they will be uncovered some day!

After all that walking I was starting to get a little hungry. On the street behind Sharif Hussien bin Ali Mosque you’ll find lots of restaurants serving a variety of Middle Eastern cuisines. I wandered around the streets and can’t remember exactly how I ended up on the 2nd floor of Bukhara Restaurant (that’s the sign on the first level, not sure if the 2nd is the same), entered from the side. Well as usual I wasn’t quite sure what I was ordering, fingers crossed after some pointing at the menu. It turned out great this time, and I got a mountain of biryani and a huge slab of mutton for 4 JD. Most meals in Jordan come with the flatbread you see below.

I opted to sit on the outdoor terrace, overlooking the beautiful Sharif Hussien bin Ali Mosque. The restaurant staff were concerned if it would be too warm and suggested that I sat in the air conditioned area, but I thought it felt fine. It did indeed get warm after some time, but the view of the Sharif Hussien bin Ali Mosque, the Red Sea, and Israel in the background- priceless.

Sunset by the Beach in Aqaba

I could barely finish half of the food, and the restaurant staff were really kind to pack it for me, and with that, all of the day’s meals settled. After a short rest back at the hotel, I headed back to the beach to catch sunset.

It was still pretty packed that time, but as the sun slowly slipped away, so did the crowds. Most of those that remained were couples catching some quiet time on the beach and hawkers attempting to sell little souvenirs to these couples.

As the last bits of sunlight slipped away, it was time to return to the hotel. On that same street behind Sharif Hussien bin Ali Mosque (I haven’t been able to find the name), near the end at Al-Hammamat Al-Tunisiyah Street, there is yet another street behind that street. On this well hidden alley there are a couple of run down looking budget hotels. While the exteriors definitely didn’t look inviting, the rooms were clean and comfortable enough, at least for one day or perhaps even a few days. I stayed at night at Dweik Hotel, which wasn’t great, but sufficient for the price.

And that concluded my quick day in Aqaba. Worth a visit? If you’ve some time on your hands a day here wouldn’t be a bad choice, but there are many more awe-inspiring sights (other than Petra and Wadi Rum) that might be better worth your time in Jordan if time is tight. I’ll be adding posts on them soon, stay tuned! 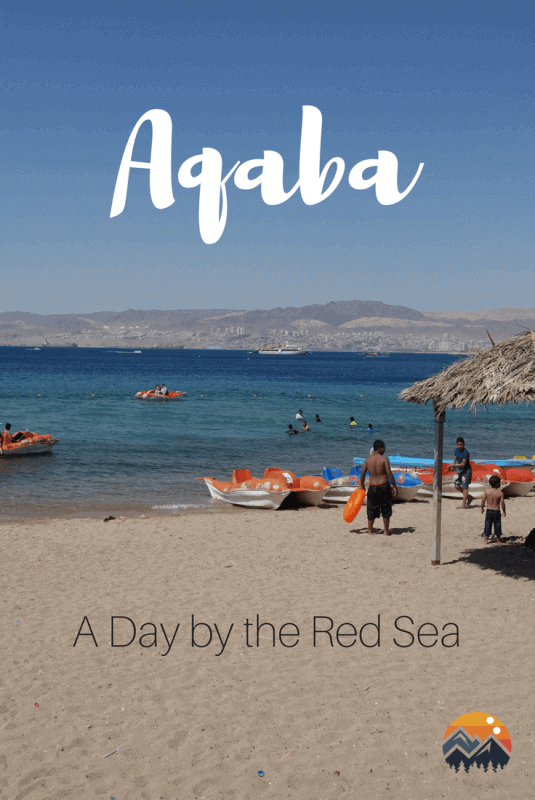