Hiking the beautiful Kungsleden (King’s Trail) in northern Sweden, from Kebnekaise (from Nikkaluokta) to Abisko. A journey across dramatic mountain passes, vast open valleys and elegant lakes in the Arctic Circle in early autumn.

The Kungsleden is a 440km trail stretching through the wilderness in northern Sweden. The most popular segment is the northernmost portion, from Abisko to Kebnekaise/ Nikkaluokta (~110km). It is also the segment I was to attempt, on my first serious hike in Europe. The Kungsleden is generally well marked, with cabins spaced out comfortably enough for day hikes (~10 to 20km). Starting out at Nikkaluokta, I made a couple of detours before reaching the Kungsleden at Singi, heading towards Abisko. Most people though, do it the other way, from Abisko to Nikkaluokta.

For general information on hiking the Kungsleden, check this out.

Having survived 4 eventful, but at times really terrifying days in Swedish Lapland (in Kebnekaise and Tarfala) so far, I was glad to finally be on the Kungsleden proper. No more summit attempts, ice sheet crossings, or hours without seeing a single soul. I wasn’t expecting to see that many people on the trail though. It was late in the hiking season, and the direction I was in meant less likelihood of seeing people later in the day.

Exiting the Tarfala Valley (8km), I arrived at the junction between the trails to Nikkaluokta, Kebnekaise and Tarfala for the third time in 4 days. It was around noon by then. I figured I’ll have just about enough time to reach Singi before sunset (16km away). If things were to go great (haven’t been in the past days), I might be able to make a dash for Salka. I was running a little late in my schedule and hope to catch up with it somehow.

After 4 days of pure fear, awe, terror and amazement, I was feeling a little emotionally drained, and was almost dragging my feet through the Laddjuvaggi valley past Kebnekaise. After all, it wasn’t the first time I was seeing those mountains near Kebnekaise, but only the first time I was to walk through them. They were nonetheless spectacular, and it was an inspiring experience to be walking alongside these giants, the tallest peaks in Sweden.

Fortunately, the walk through the valley alongside Kebnekaise, Laddjuvaggi, was without too many new and exciting stimuli. It was a welcome change from the previous days, and much needed for some recovery of my sanity. Weather was also definitely much calmer.

Towards the end of the valley, I felt slightly better, physically a little tired but somehow more energetic and alert. Slowly, the awe of nature and serenity of being alone in the wilderness crept back in.

By then, there were nobody else on the trail towards Singi, allowing time for some introspection. Everything felt still. The air, the water, and everything else in between.

A little cold, a little wet from crossing shallow streams, but relieved to have completed another day. The cabin (410SEK per night with STF membership) was crowded, and felt a little cramped, but just right for a night’s rest, as I prepared for another long day tomorrow. I spoke to a few friendly travelers eager to share their stories, and whom were probably a little amused to find an Asian alone this far north in Sweden, but didn’t interact too much as I was tired and turned in early.

I woke up early and left quietly, while most of the cabin was still asleep/ just got up. This was the day to get my schedule back on track, by skipping a cabin (Salka) and heading straight to Tjaktja. But for that to happen, I had to be on my way.

The walk to Salka was short (12km), and scenery pretty much similar along the way, though no less beautiful. What better way to start the day than a morning walk through untouched valleys flowing with endless supply of fresh air and water.

Along the route there were emergency shelters available. Kuoperjakka was somewhere midway between Singi and Salka, and also near the the point where I would have started the Kungsleden trial if I had managed to make it across the glaciers at Tarfala a few days back.

Took a breather, hid from the chill for a few minutes, then back on the trail again.

You can pay by credit card at the shop at Salka, which sells a range of food and supplies, but it is dependent on weather conditions, as with the other shops along the trail, as it is powered by solar energy. The cabin manager welcomed me to Salka and offered a delightful cup of berry juice. I didn’t buy anything though, but was able to use the cooking facilities (free for STF members) to get some lunch before I continued towards the final uphill part of the hike, across the Tjaktja Pass.

After a nice warm lunch, I was refreshed and ready to go.

I continued on the trail as the valley opened up, then narrowed as I approached Tjaktka Pass, the highest point of the Kungsleden.

2 more hikers arrived at the shelter shortly after. I decided to make the final push towards Tjaktja Mountain Cabin after a short rest, despite it getting late by then.

The weather was visibly worse as I stepped out, the damp, wet air compounded by even denser clouds. I lost the trail for awhile and had to scramble over some steep surfaces, before miraculously stumbling back onto the path marked with red marks. By now, however, the mist was so dense that I could barely see the next red marker, and at times had to walk blindly forward for a few steps before being able to see the next marker. I felt cold, and afraid, but the thought of a warm night in a cabin not too far away kept me going.

As the trail descended and clouds cleared (just a little), I knew the cabin had to be close by.

Tjaktjastugan (410SEK per night with STF membership) is a simple but comfortable cabin, a paradise in otherwise bleak surroundings at Tjaktja. As usual, I offloaded my stuff into the dryer room before spending the next few hours in the kitchen enjoying simple pleasures of warm instant foodstuff. With Tjatka completed, I was back on schedule to leave Lapland in 4 days. Compared to the 25km I completed today, the next day was to be relatively more comfortable, just 13km to Alesjaure. The last couple of hours had whizzed by, occasionally terrifyingly. It soon got dark, and I was glad to be able to turn in with a peace of mind, in a comfortable, warm bed. 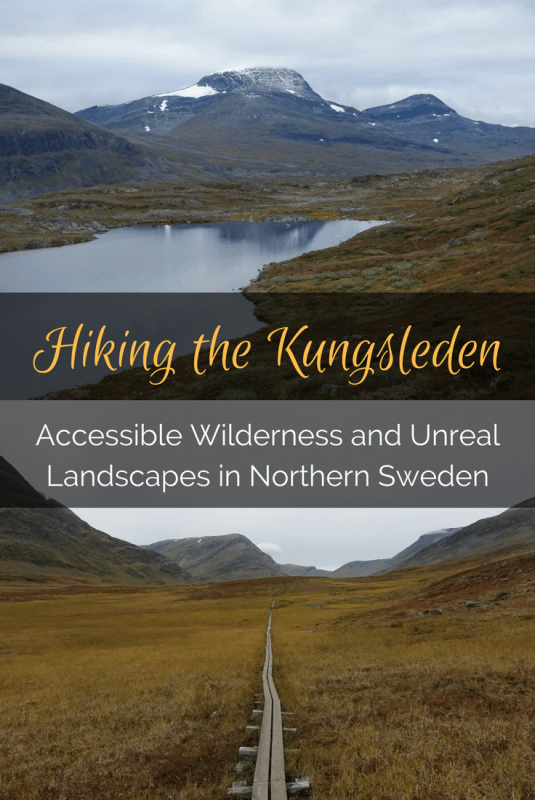 4 thoughts on “Kungsleden in autumn: From Kebnekaise to Tjaktja”